Nary a week goes by that the Chinese media doesn’t provide us all with something to chuckle at and re-enforce our “oh those crazy Chinese” mentality.

This week’s big news flub comes right from the top, Xinhua. The State-owned mouthpiece’s English-language Web site ran a serious story about a breakthrough in identifying what causes multiple sclerosis.

As multiple sclerosis is a complicated medical condition, and any sciencey talk is likely to be confusing and hard to follow, the site opted to add a visual aid … in the form of Homer Simpson’s peanut-sized brain. 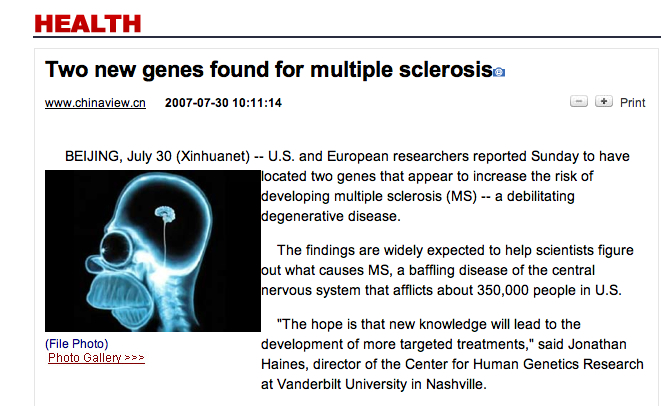 The site has since removed the image, but thanks to Danwei’s quick screen capturing abilities, it’s still alive and well enough for all of us to enjoy and shake our heads at.

Though the agency employs talented (and exceptionally patient) “polishers” for their overseas news wire, the Web site is all in house, and apparently staffed with highly intelligent and worldly individuals.

An article at Computer World rightly points out that on top of the fact that this photo is just stupid to include, it raises an equally disturbing question about China’s flagship media outlet scooping photos off the net and reprinting them without the proper copyrights. I mean, if they do it…

As the article was decidedly “Western” in its news (American and European medical breakthrough), it leads one to wonder if the folks that attached this image to the article actually believed Homer Simpson’s x-ray was that of a real human being.

I can only shake my head and ponder the implications of that.