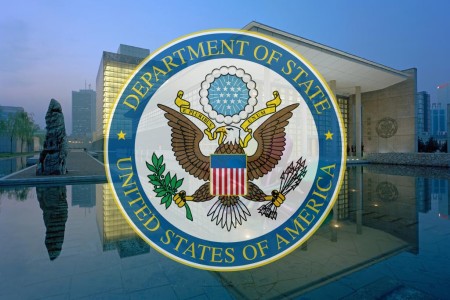 The US Department of State today sent out an e-mail warning US citizens of the alleged planning of a possible terrorist attack in Kunming, Yunnan. While the message made clear that the US Embassy in China was not able to verify the accuracy of the report, it obviously felt it important/reliable enough to send out. The full text of the message follows.

The warning comes not even a year after the deadly attack last March at the Kunming train station, which left 29 civilians dead. While security is sure to be heightened at China’s major travel hubs, the sheer number of travellers during the holiday makes an attractive terrorist target. If you’re travelling over the holidays, stay alert and avoid crowds as much as possible — the New Year’s crush in Shanghai showed that terrorism is not the only danger.

The United States Embassy in Beijing is aware of media reports alleging that terrorists may be planning to launch an attack in Kunming, Yunnan Province over the Lunar New Year period.  The Embassy has not been able to verify the accuracy of this report.

As noted in the current Country Specific Information Sheet for China, violent attacks in 2014, including acts of terrorism, resulted in several dozen injuries and deaths in public spaces throughout China, including in train stations and markets.  Although neither U.S. citizens specifically nor foreigners generally were targeted in these attacks, such incidents pose a random threat to foreigners.  As always, the Embassy urges U.S. citizens to pay attention to their surroundings when traveling in China and report any concerns to the local police.

For the latest security information, U.S. citizens living and traveling abroad should regularly monitor the Department’s Bureau of Consular Affairs Internet website at http://travel.state.gov, where the current Worldwide Caution, Country Specific Information, Public Announcements, and Travel Warnings can be found.  Up-to-date information on security can also be obtained by calling 1-888-407-4747 toll free in the United States or Canada, or for callers outside the United States and Canada, a regular toll line at 1-202-501-4444. These numbers are available from 8:00 a.m. to 8:00 p.m. Eastern Time (EST), Monday through Friday (except U.S. federal holidays).

The U.S. Embassy in Beijing can be reached 24 hours per day at 86-10-8531-4000.  The addresses and telephone contact information for the U.S. Embassy and Consulates in China are at the bottom of this announcement.

U.S. citizens residing or traveling in China are reminded to register with the U.S. Embassy or closest U.S. Consulate by entering your travel itinerary and contact information at https://step.state.gov/step/. In case of difficulties registering online, please contact the closest U.S. Embassy or Consulate.

This consular district includes the provinces/autonomous region of Guangdong, Guangxi, Hainan, and Fujian.

This consular district includes the provinces/autonomous region of Guizhou, Sichuan, Xizang (Tibet) and Yunnan, as well as the municipality of Chongqing.

This consular district includes Shanghai municipality and the provinces of Anhui, Jiangsu and Zhejiang.

This consular district includes: the provinces of Heilongjiang, Jilin, and Liaoning.

Please note that Wuhan does not provide regularly scheduled consular services. Contact the Embassy in Beijing for consular assistance.