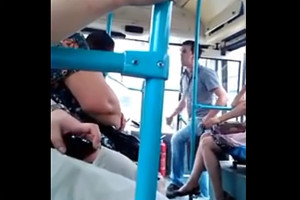 The bad laowai category on Lost Laowai has grown a bit dusty over the past year or so, as I questioned whether it was a good idea to lend attention to a very small section of the foreigner crowd who were behaving badly in public (and becoming Youku stars for their efforts).

It appeared for a while that the Chinese, and more relevantly, the Chinese government, were weighing these autonomous events with more mass than they actually contained, and it threatened to hurt the community as a whole. But with the heat somewhat cooled from last year’s flame-up of angry nationalism towards us laowai, I think it’s probably important (or at least entertaining) to again start reminding foreigners that you are always being filmed, and if you lose it in public, you will get 400,000 views on Youku in the course of a day.

As is the case with a video Beijng Cream came across yesterday of a foreigner losing his shit on a bus driver in Chengdu. According to comments on the post, the guy is intermittently speaking English, Chinese and Croatian; and not in the friendliest terms.

It appears his anger stems from the bus driver not waiting for him, and in forcing him to run after the bus, either splashed him or caused him to splash in a puddle, getting his jeans in a mess and panties in a bunch.

And with that, we add “bus” to the list of troublesome methods of transport for the laowai to lose his cool (why is it never “her” cool?), along with trains (twice), cars, and just walkin’.

Stay classy my foreign friends, and maybe take a taxi.

The original Youku video seems to have been removed. If anyone knows of an in-China link to the video for any without VPN, please share in the comments.