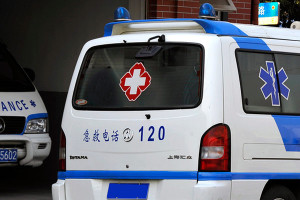 Richard Brubaker recently wrote a poignant piece at All Roads Lead to China called “When the Ambulance Doesn’t Come“, in which he talks about the recent heart-breaking story of a 3-year-old British boy in Shanghai who died from injuries sustained when a partition at a restaurant fell on him.

Though the mother and restaurant owner rushed the boy to the nearest hospital, they were told by a security guard that the hospital didn’t have an emergency room. At a second hospital the boy was examined, but the doctors said they didn’t have the necessary equipment or medicine to properly treat him. After waiting for an ambulance to be transferred to a third–better-equipped–hospital, the boy was pronounced dead.

The All Roads piece points out that “fully staffed ERs that are either specialized in child care or able to take children were within 15 minutes” from where they were. It goes on to outline what some of the key hospitals in Shanghai are, and includes a helpful Shanghai medical emergencies map (PDF), but before that he relays some important advice:

… it is important that all parents in Shanghai know where to go when things go wrong.

So, before I get into the hospitals themselves, a few points to make clear is that not every hospital is Shanghai is specialized in children, and even those that are, they often specialize in a different condition. So, while getting to an ER that has pediatric care is of tantamount importance, it is also important to know (and research) the fact that you may be driected to another hospital who can give the specialize care.

Another point that should be made clear is that within the expat community there is the belief that Shanghai United and Parkway have the “best” quality of service, but these are not necessarily options depending on the emergency. In fact, as I posted earlier, they are not legally allowed to treat anyone with a fever, and in many cases their pediatric staff is not working evening shifts. So, if you are fortunate enough to be a regular at either of these facilities, then I HIGHLY RECOMMEND that you speak with your pediatric about emergency care. Get them, or the nurses, to give you their thoughts on where you should take your child. particularly if your child has a chronic condition (asthma).

As a final note he also states that should you find yourself in an emergency, you shouldn’t wait for an ambulance, but rather pay a taxi generously to drive like the wind to get you to the nearest (applicable) hospital.

I encourage all readers, especially those with children, to sit down and come up with a general emergency plan, as well as the addresses and phone numbers of all local hospitals (in a format that you can quickly take with you and show a taxi driver, if you don’t speak much Chinese), including what their specialty is. You can’t be a parent in China and not always be on edge about safety, but I think it’s easy to let the constant deluge of news about health dangers lull you into a bit of a fate-accepting complacency. Knowing where to go and what to do in an emergency will hopefully be knowledge never needed, but when it is, you don’t want to be Googling it.

If you have any additional tips or resources, please share them in the comments below.