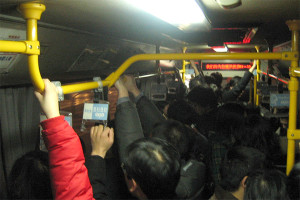 Over the years I’ve lived in China, certain aspects of life here have begun to bother me more and more. I think it’s normal. Every long term expat has their pet peeves about China. There is one particular thing which began to irritate me when I had been living in China for around three years, and has bothered me ever since. I am talking about the constant noise pollution you suffer when you take any means of public transport, as a result of the constant, repetitive, irritating and utterly pointless public announcements which are played again and again on loudspeakers for the “benefit” of the passengers.

Many of the other constantly repeated announcements in the busses and the subway are in the same vein: beyond obvious and irritating. There’s 请携带好您的随身物品 (Please make sure your belongings are properly protected). There’s 下车的乘客，请坐好准备 (passengers who are about to get off, please get ready).  And of course, in the subway there are also the announcements with a patriotic bent: 先下后上是中华民族的传统美德” (getting off first and getting on after is the traditional virtue of the Chinese people). I didn’t know Confucius dictated how to get off a subway train in the Analects. If only it actually had any effect on people’s behaviour! And this is without mentioning the ticket sellers on the buses, who add to the racket by hollering the extremely useful advice “往前走” (move forward) again and again when a crowded bus has stopped, and people are jostling to get off.

Of course one does hear announcements when taking public transport in other countries too, but at least in the European countries which I am used to it is not nearly as pervasive. Buses in most of Europe tend to have absolutely no public announcements whatsoever, not even to indicate the name of the stop. Most subway systems do have a few, but usually not as many, as meaningless and as irritating as in China. London’s famous “mind the gap” announcement is rather pointless too, but it is at least short and it has even inspired a line of t-shirts for tourists.

The funny thing is that the few times I have pointed out how annoying I find this constant assault on the ears to Chinese friends, they have defended the necessity of such announcements. They claim that it is necessary to keep repeating 请注意安全，otherwise people might not remember to” pay attention to safety”, especially little children. And if you don’t keep reminding people not to forget their possessions on the bus, well, they might forget them. The fact that the very repetitiveness of such phrases means that people don’t even notice them any longer seems lost.  When I tell them that in my country there are absolutely no public announcements of any kind in buses, they look baffled. After all, how can you function without an authoritative voice telling you what to do the whole time?

I can understand that Chinese people do not find such things as irritating as I do. After all, they are conditioned from birth (at least in cities) to put up with a constant level of racket which would seem unacceptable to a Westerner. Always surrounded by people, they learn to drown out noises, smells and sights to an extent few Westerners could achieve. However, actually defending the usefulness of this constant barrage of irritating noise is another thing. Oh well. Luckily I now live close enough to my work to cycle, and do not have to take public transport on an average day.