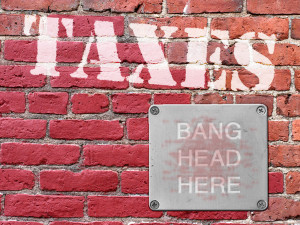 I’m trying to be a good citizen or resident or businesswoman or whatever you want to call me.

I figure I use the things that tax money buys. I use the roads and the street lights at night. I use the parks and the heavily subsidized public transportation.

So I figure it’s only right that I ought to pay taxes.

Since avoiding paying taxes remains significantly easier than the act of actually paying taxes, I prefer not to pay.

There has to be an easier way than the current system. I’m not necessarily saying that it has to be the American way or the European way, just that it has to be not the way it’s currently being done. I sort of understand the reasoning behind how the fapiao system came to pass but that doesn’t make it an efficient or effective way for the government to collect payments.

Lots of businesses give a discount if the customer or client doesn’t want a fapiao. I used to think this was just because they didn’t want to pay their taxes. As a taxpayer, I now realize that the discount reflects the amount of pointless effort that must be expended in an effort to pay taxes.

I acquired the right to give out handwritten fapiao sometime in the Autumn of 2011. Prior to having handwritten fapiao, I was going to the counter at the tax bureau to issue my fapiao. Every single time I was there, they flat out refused to admit that any kind of fapiao existed other than the machine printed ones I absolutely did not want to buy a dot matrix printer for. However, the accountant I had at the time knew the right questions to ask and I eventually got two books of 25.

To further add to the unpleasantness, it was a book of carbons and if you forgot to put the piece of cardboard between the correct sheets of paper you ended up getting marks on the wrong sheet and those sheets had to be thrown out. But they cost me nothing. And I knew from the training session I’d gone to on the Simple Online Tax Paying System that the computer software was easily as frustrating, required I have a Chinese OS computer to run it, and needed a dot matrix printer.

So handwritten fapiao it was.

About six or seven months after I started using them, I found out about my company’s eligibility to have pre-printed fapiao. Going to the tax bureau and getting things changed was way too much trouble and I didn’t change over until after I hired a personal assistant in October of 2012.

My new assistant passionately hated the handwritten fapiao. I totally understand this. It doesn’t matter what their native language is, most people who have grown up using computers dislike writing by hand. Furthermore, as a native speaker, it had to be humbling to discard multiple receipts per fapiao-writing session because a character was written wrong.

We only used the pre-printed receipts for 4 or 5 months. It wasn’t too bad when they gave them to us in denominations of 1, 5, 10, 20, 50, and 100. Once they stopped giving pre-printed CNY 100 receipts to service companies in Haikou, however, it looked like I was going to be forced to enroll in the Simple Online Tax Paying System. Giving 600 individual pre-printed slips of paper to a client is a little bit tacky.

So I finally enrolled in the Simple Online Tax Paying System. If I bring my Chinese language laptop over to his office, I’ve got a friend who will let me use his Fapiao Printer. I could buy my own Fapiao Printer. The CNY 1000 price tag on the recommended fapiao specific printer isn’t that horrible and CNY 150 I could spend on a normal dot
matrix printer from taobao is even better. That having been said, I simply flat out refuse to regress to a technology my family stopped using in the late 80s.

I didn’t realize this at the time I attended the training course two years ago but the software for the Simple Online Tax Paying System is optimized to run on Windows 95.

I spent about two hours setting up my old laptop to run the software. I downloaded things from the Tax Bureau’s website. I configured things on my laptop. I reconfigured things.  Not all of this was their fault, other than re-installing the operating system with a Chinese version of Windows, I haven’t used my old laptop since I got my new one and there were lots of things missing.

I really try not to take delight in the pain and suffering of others but it’s so immensely gratifying when I’ve given up on something frustrating with a bank or the government and, after handing it over to Jimmy, get to hear him muttering under his breath and cursing at the computer screen. I especially like the expressions he makes when he’s on the phone with a “helpful” individual.

That was on Friday.

By Monday afternoon, it was set up and my first batch of printed fapiao were issued. Right now, however, I’m limited to CNY 1000 per sheet of paper. We have to fill out an application form asking for permission to write larger value fapiao.

Pardon me while I go bash my head against the wall now.