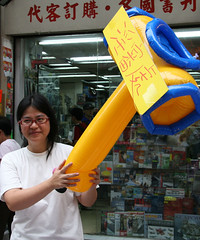 Who the hell is Oiwan Lam and why does she need freeing?

That was the question I was asking myself as when I got the invite to join the Free Oiwan Lam Facebook Group. It was that question that led me to Imagethief’s post of the same title.

Turns out Oiwan, an editor for Global Voice’s North East Asian desk, doesn’t actually need to be freed from anything, at least not like Hao did, and Celil still does. She is, however, facing a serious slap on the wrist (not the kind your mom gives you, but the kind oppressively-sensitive govm’ts give).

Her crime? She posted a link to this picture (WARNING: contains boobies in an artistic way) in protest to the charges and $5,000 fine given to Woo Tai-wai, a 48-year-old Hong Kong resident.

And so now I was asking myself what this guy did to deserve such a steep fine? Well:

“[Woo] pleaded guilty in Kwun Tong Court to publishing eight obscene photos via a local internet forum. He provided a linked message which, when clicked, would enable other forum users to access an overseas pornographic website showing the photos. A hyperlink is a graphic or text string which, when clicked, opens a new web page or jumps to a new location in the current page.” – South China Morning Post/via ESWN

He actually got off easy, as a link to a pornographic Web site deemed Class III offensive under the Control of Obscene and Indecent Articles Ordinance (COIAO) can amount to a HK$1 Mil. fine or three months in jail. Just for linking to it!

And there in lies the trouble with this whole thing, and what us Weblishers are, rightfully, getting all ansy over. Can we really be held liable for the content of sites we link to?

The obvious question then is, aren’t search engines in a whole load of trouble?

I’m sure that last bit is likely keeping key members of respective Bureaus Responsible For The Betterment of Mankind Because We Say So up all night, just thinking of ways they can leverage this to finally allow them to get into Google’s panties.

The real point of this though is one that Oiwan herself made:

Another gap through which political censorship can be introduced is pornography. This gap gathers the power of the state as well as the forces of religious people and fake moral politicians. – Oiwan Lam

That power is a snowball that rears its head all over the globe. It makes me itch that we still live in a world where the values of the influential can be placed on those of the not.

One last question… why, in 2007, are we still scared of naked people?