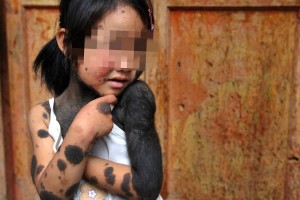 I am Little Wolf, though some of you that have been around for awhile might remember me as Lang-Lang from the old Sinocidal crew. Ryan has been kind enough to allow me to hijack his blog in order to help a little girl.

Perhaps many of you are already aware of the plight of Lili, the so-called “Guizhou furry girl”. Some weeks ago, Chinasmack.com posted her story and many readers were moved and motivated to help and raise money for her treatment, which will consist of 6-7 surgeries over a 2 year period.  As many of the best things in life, my involvement began quite unexpectedly and by accident. Several of us got together offline to come up with ways to help and somehow, by default, I became the unofficial spokesman for the cause.

After the Sichuan Earthquake, we had all been pretty much disgusted and jaded after watching truckloads of cash being collected from every corner of China and around the world only to see it fall into the hands of the local government whose first order of business was to purchase a fleet of Japanese SUVs. My best friend is a reporter for a major newspaper and was sent to Wenchuan last year for a follow-up story and came back absolutely horrified after talking with the local people who appealed to him to get the word out that the citizens had not received a single jiao or benefit all the while, the government is constantly congratulating themselves on the excellent way they have dealt with the aftermath.

This, along with the Guo Meimei Red Cross scandal and vast array of other examples had left us with a dilemma. We were eager to help but very dubious about donating any money that we had no idea how it would be spent. After some investigation by my reporter friend and his colleagues, we discovered that Angel Mom is an outstanding and transparent organization that people could donate to with absolute confidence. The biggest obstacle was that there was no real infrastructure in place for foreigners in and outside of China to receive donations, as any foreign community concern was completely unexpected. This was rectified quickly with the help of A Life A Time Foundation in Toledo, Ohio, USA. Fauna of Chinasmack has been very active and generous in keeping Lili’s story in the spotlight and the support from the foreign community has been truly astounding. It has been amazing watching all the bickering put aside for this little girl’s well-being and witnessing a whole new depth and dimension from the expat community has given me a new faith in humanity.

On Sunday, July 1st, I had the pleasure of visiting Lili at the #9 People’s Hospital in Shanghai where Lili had traveled from Guiyang for the first of her surgeries and it will forever be a great memory of my life. Not only meeting Lili, but also Anjuer, the Angel Mom volunteer that oversees Lili’s case; Xuzebin (Eric) who was the original reporter of Lili’s story for the Guiyang newspaper and who has now become like a big brother to Lili; the volunteers at the Shanghai’s Children’s Hope Center, a kind Ronald McDonald House where orphans from other provinces can live while they are getting medical treatment in Shanghai; and the charming kids that were there that day. If you are in the Shanghai area, I cannot urge you enough to go visit them. It’s wonderful way to spend an afternoon. We rant and rave about China and never realize there are so many good people doing kind and unselfish things going unnoticed.

There is still a lot of work to be done and funds needed for Lili. There has been a little more than half of the 120,000 rmb needed for Lili’s surgeries and aftercare. All in all, it seems like Lili’s life is going to get better. There are even rumblings of a Discovery Channel documentary about her in the works and her story has spread around around the globe. Being a small part of that is certainly one of the most satisfying events of my life.

Thanks for taking the time to read this and thanks to Ryan for helping to spread the word.

Jiang-Li is a 5-year-old Miao Minority girl from Qingzhen City, in Guizhou Province. She was born with a big mole that covered her body. Her mother took off when Jiang-Li was just two years old, and was never heard from again. Soon after, her father dropped her off at a kindergarten in Guiyang City, and didn’t come back to pick her up. Jiang-Li’s grandparents had passed away. Jiang-Li was literally an orphan now. Her kind Great-Uncle heard about her story and took her into his home. Since then, he has been taking care of her for almost four years.

Jiang-Li’s Great-Uncle is almost 50 years old. He has a 95-year-old mother as well as three teenage kids. Both he and his wife never went to school and are unable to read. The whole household income is just from selling corn from the family corn field, which does not make them much money. During the non-peak farm season, Jiang-Li’s Great-Uncle will go downtown to find labor work and make some extra money to support the family’s daily expense. His wife is in a bad health condition. She can only stay home doing some housework. No matter how poor they are, they all love Jiang-Li very much and also sympathize with the little girl, whose parents abandoned her when she was an infant. When Jiang-Li grew old enough to go to school, she was bullied by other children because of the big moles all over her body with thick and dark hairs, although she was a happy girl who laughed a lot, liked to have fun, and loved to read. The elementary school is very close to her home, but she can only watch the students play. The students always tease her and give her nicknames like black hair girl, monkey, freak…

One day, Jiang-Li’s Great-Uncle took her downtown. While they were made fun of by people as they were getting used to, a local volunteer saw the incident, took a picture, and posted it on the internet. A friend of mine saw the post on the internet. She knows that I have been doing some relief projects for poor children, so she forwarded the story to me. When I first saw the picture of the innocent child, my heart was broken. Such a little girl is suffering such a huge unfairness. She is also a human being, and she is just a little child that needs to be taken care of. I forwarded the post on the internet to Professor Zhang, an orthopedic specialist at Shanghai No. 9 People’s Hospital. Professor Zhang replied to me immediately about the treatment procedure and budget.

On June 8th, we received the application forms for the AngelMom Fund and all the supporting documents that we needed. We hope we can raise enough money for Jiang-Li’s surgery expense. It was a lot of work for the two volunteers in Guizhou to take a whole day to drive to Jiang-Li’s family to confirm the situation. We really appreciate their hard work.

At the same time, we consulted Professor Zhang at Shanghai No. 9 People’s Hospital again. He suggested Jiang-Li to have 6-7 surgeries. The whole process will last about 2-3 years. The total estimated expense is about RMB 120,000. We suggested the doctor to have Jiang-Li’s face operated on for the first step of the surgeries so she can go back to school soon. The first step will need about 2-3 surgeries and will take about half a year. For each operation, Jiang-Li will need to stay in the hospital for about a week.

We’ve finished most of the pre-work for the research and planning. Now it is the time to raise enough money for the complete treatment. Jiang-Li’s Great-Uncle is the only source to earn the income for the family. They cannot afford the high medical costs. It is also not his responsibility to take care of a child who is not in his family. We are hoping that we can get more and more people to help this little girl.