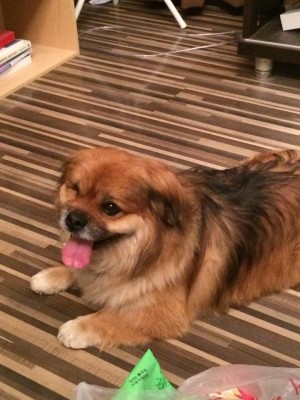 Stories of roving bands of stick-wielding chengguan beating pets and strays have been hitting the media for a number of years now, but this is the first we’ve heard of it entering the China expat community. These stories are senseless brutal tragedies regardless where the pet’s owner hails from, but I think there’s always been a certain feeling of exemption or impunity towards this issue in foreigner circles. As Jack’s story shows, the reality is much the opposite.

Jack’s owner recently relayed what happened to The Nanfang:

I’d taken the dog out early Saturday morning. I usually take him on a path in the compound where there’s some garden and space for him to do his business. I took him further this time because he hadn’t been out since the early evening on Friday. After about 10 minutes of walking, I spotted 3 guys by the roadside, who approached me and stopped me. Two of them were wearing Chengguan uniforms, and one was in plain clothes. One of them asked to see the dog’s registration photo ID card thing, and I told them I had only had him a very short time and that I was in the process of getting it. I offered to show them his vaccinations, and the info I’d gathered on registration.

He told me he didn’t care about any of that, and that if I didn’t have the ID card for him they were going to take him right now. You know the dog wasn’t keen on strange men, and he was getting fidgety. I insisted that it was all being done and that he was safe, vaccinated and always kept on the leash. He started to get angry with me and told me I was out of order. I’m not exactly a picture of calmness myself when faced with surly idiots who are wasting my time, and I argued back. He told me he was gonna get me in big trouble for not having the proper documents. I told him I was gonna walk on and there was nothing he could do while I was still getting my documents sorted. I started to walk forward, the dog growled at them and let out one bark. The guy pushed me back and one of the others grabbed the leash from me. They had some kind of baton with them and they whacked the dog over the head so hard he barely yelped, he just fell down. I protested and went to shield him but the other guy pushed me back while they beat the dog 3 more times. They bundled him into some black backpack, and got into an unmarked car (looked like one of the heiche cars, wasn’t an official chengguan car). They drove off and left me there.

As a dog lover and owner, my heart goes out to Jack’s owner. Unfortunately, justice is unlikely to be dealt to the sadistic monsters that did this, nor is it likely to be the last time we hear of a story like this. If you have a pet dog in China, be sure to take the steps to register it — though it’s commonly overlooked or ignored, it’s relatively easy and inexpensive and could mean the difference between life and death for your pet.