On the afternoon of January 19, a foreign man thwarted a robbery on a busy Xi’an bus — catching and beating his would-be thief before debarking. 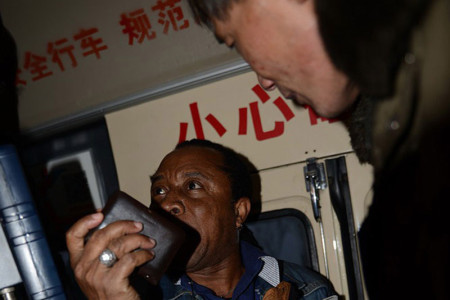 The story was first relayed on Huashang BBS by Yan Jianshe, a passenger on the bus at the time. Yan was on Xi’an city bus 707 when he heard an argument from the front of the bus. In an interview with Huashang News, Yan said, “The bus was very crowded at that time. Suddenly I heard people shouting in English. Although nobody understood what was being said, everyone realized someone’s stuff had been stolen.”

Yan walked to the front of the bus to find a foreigner holding onto a Chinese man and refusing to let go, while a woman beside them shouted for whoever stole the man’s things to return them.

“The foreign friend was very angry. Suddenly he lifted his hand and punched the [alleged thief] in the face hard. He hit him three more times. The [alleged thief] was obviously caught off guard. His face and neck turned red immediately and he showed signs of bleeding.”

After being hit, the suspected thief pointed at the victim’s bag, where the missing wallet was discovered — it had gone missing from his back pocket. It was assumed that the thief had an accomplice on board who returned the wallet to the bag while the argument was taking place.

“There were a few men on the bus during the altercation; however, no one offered assistance,” Yan said.

After reclaiming his wallet, the foreigner slapped the thief twice and spit on him before leaving the bus, at which point the thief cursed, “Fuck your mother! If you weren’t a foreigner, I’d have already killed you.”

A short while later, the thief left the bus with an associate. Witnesses on the bus saw the two appear to argue after disembarking. Several days after the incident a Huashang reporter contacted the local authorities and was told no official report was filed about the incident.

Comments from Chinese netizens run the range, from utterly nationalistic to overly pragmatic, but largely express that the thief got what he deserved.

西安老方: 这种丢人丢到国外的渣滓，打死才好！(You lost face to a foreign country, you deserve to be beat to death)

abao: 对付小偷就要用这招！(That is a good solution for dealing with thieves!)

李草木: 打得好，最解恨得是给吐了口洋唾沫，太有创意了，顶黑哥，顶严老师。(Good job for beating him up; the best part is the spit, very creative.)