Rather shocking news as reported by Xinhaha earlier today: 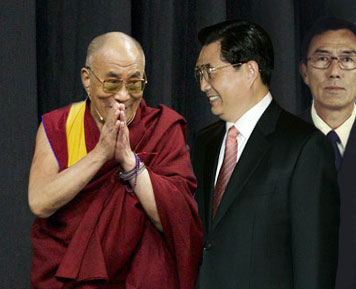 BEIJING, March 31 (Xinhaha) — After allegations by Chinese Premier Wen Jiabao earlier this month that the Dalai Lama and his supporters were directly responsible for the recent violent insurgence in Lhasa and other parts of Tibet, a surprise announcement was made Tuesday that the Dalai Lama had met with Chinese President Hu Jintao in an effort to reconcile with the government in Beijing.

The visit to the nation’s capital represents the first time in nearly 40 years that the Dalai Lama has entered China, having left the country in 1959 to pursue an interest in the arts and a desire to obtain the Nobel Peace Prize. In front of an intrigued crowd, Hu called the event “a milestone on the pathway to a harmonious society.”

Speaking to reporters, the Dalai Lama stated, “I welcome this opportunity to begin, finally, the healing process between Tibet and the rest of China. I only wish we had begun sooner, as I rather dislike curry.”

Also on hand was Qiangba Puncog, Chairman of the Tibet Autonomous Region government, who introduced the Dalai Lama as a “true friend of China” and apologized for any negative remarks he had made about the peaceful spiritual leader in the past. “Things I may, or may not, have said prior to this glorious day were, or may have been, out of harmony with my actual beliefs. I am a Tibetan, of course I love the Dalai Lama. I need all the karma I can get.” 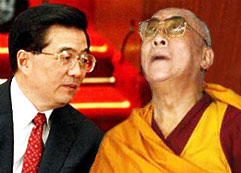 After the public appearance, President Hu and the Dalai Lama began an official dialog of reconciliation whereby China agreed to allow the Tibetan spiritual and cultural leader return to his homeland under the stipulation that he would publicly announce he has no intentions of independence, but only autonomy and that he would endorse the creation of Lamaland Theme Park™.

In turn, the Dalai Lama asked for reassurances that none of his followers would be retroactively punished for their dissension over the years, and that all ethnic Han Chinese in Tibet would stop pretending to be Tibetans in an effort to cheat foreign tourists.

His Holiness concluded talks with Hu saying, “Liberation, subjugation. It’s about time we call the whole thing off.”