Here’s a cool idea: Tear up the gray concrete of Tiananmen Square and turn it into a Chinese version of New York’s Central Park. One leading architect is suggesting something along those lines, the Guardian reports (via CDT):

Ma Yansong, an award-winning urban planner, says the grey concrete symbol of China’s red politics should be given a green makeover. To heighten awareness about the environment, he believes the Beijing square should be transformed into a park and forest. In his model, the vast expanse of paving slabs outside the Forbidden City are replaced by trees and grass. There are lush thickets around the mausoleum containing Mao Zedong’s embalmed body and a verdant entrance to the Great Hall of the People.

“We want to transform this empty political square into something that can be enjoyed,” Mr Ma said. “Our aim is to propose not to criticise, to raise the issue of public space. The way we do our architecture is to show that we can come up with our own solutions. We don’t just take orders. That is why we want to show this project to the public first.” 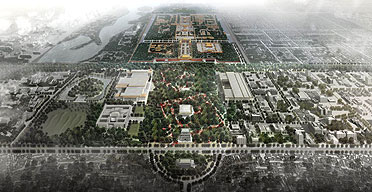 Ma tells the Guardian that there’s nothing sacred about Tiananmen. It’s not traditional, and it’s not really Chinese. Rather, it’s an homage to Moscow’s Red Square, built for military parades and grandstanding. As a symbol, it represents the past much more than the future.

The idea is more than a little controversial, though, so much that Chinese media can’t report on it, the Guardian says in a video report.

Environmental benefit aside, it would certainly give the place a new image, maybe one with fewer blood stains and more grass stains. I wonder what the people who were there 18 years ago would think about the idea.