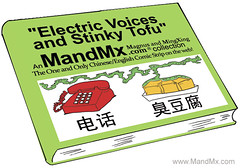 I first heard of MandMX.com back about a year and a half ago when they featured Lost Laowai in a comic of theirs. So when Magnus, the “M” of MandMX, contacted me to let me know they’d compiled their large collection of bilingual, China-themed comics into a new book, I was excited to get my hands on it.

Dubbed with the quirky moniker “Electric Voices and Stinky Tofu“, The book is an illustrated journey of ah-ha moments for any Westerner who’s spent time in China. Magnus, and his wife MingXing, have cartooned nearly every “China moment” I could think of — inking out what we all know from living here — China’s one wacky place.

I chatted with Magnus recently about the book and living in China. Here’s what he had to say:

Lost Laowai: What is “Electric Voices and Stinky Tofu”, and what was the motivation for creating such a book?
Magnus: We’ve done over 400 comics on our site now and we wanted to make a book to collect our first year’s comics and make them more readable than what you see on the web. The comics on the web are smaller than the book (according to the DOTS PER INCH. Typical internet comics are 72 dpi but in the book the comics are 600 dpi.) and the book’s words are easier to read and are of much better quality. Plus we added a nice story to the book and some doodles of our first comics that will not appear on the site.

LLW: How long have you been a cartoonist? Is it something you do full-time or just on the side?
M: I’ve been a cartoonist my whole life. I entertained all my classmates with doodles of what the teacher was saying at the time. Right now MandMX.com is part time. I do digital restoration as a full time job but I would love it someday to be a full time cartoonist. That’s my dream!

LLW: Your comics tend to meld together comedy, cultural observation and learning. Which of these (or some other) is foremost to you in creating a successful comic?
M: If I can get all three of those things into one comic I’d be happy. But I guess I try to use at least one of those in each comic. If it’s not hilarious or something about the culture then at least it should be educational. But for those studying Chinese I think each comic is at least somewhat educational.

LLW: Where do you draw (pun intended!) most of your inspiration for your comics from?
M: For comics in general I draw my inspiration from Charles Schulz the creator of Peanuts. I grew up reading his comics and also Bill Watterson of Calvin and Hobbes. I draw my inspiration for our MandMx.com comic from my everyday experiences and adventures in China. I am an avid reader about news and everything that has to do with China. At first when we thought of this idea I was worried that there wouldn’t be enough material but I’ve been shocked over the years as the material just keeps coming.

LLW: Along with running MandMX.com with your wife MingXing, you also produce a video podcast with your well-named son, Studying Chinese With Ryan. How has having a mixed-culture family shaped both your comics as well as your outlook on living in China?
M: It’s been a wild ride I’ll tell you that much. We named our son after our favorite website… Ryan of Lost Laowai. KIDDING! No seriously, it’s been a good partnership with MX since she translates all my crazy ideas. Sometimes I’ve had to throw ideas out since they just don’t make sense to her or she’ll tell me sometimes “Chinese wouldn’t think that’s funny.”

LLW: What first brought you to China?
M: I came to China like many to teach English. I went back to the states and studied Chinese in Boston and got a TEFL certificate and then returned to China. The second time I unintentionally met my wife.

LLW: Having lived in China for a solid amount of time, what advice would you offer for those foreigners who have just arrived or are planning to move here?
M: Come to our site and learn about China! But I would also just keep a few things in mind:

LLW: What’s up next for MandMX, and how can people learn more about you guys?
M: We hope to have another book at some point in the new year. We’re trying to sell the book through Google but I know there might be some trouble with that in China. People can always have their family members in Western countries order the book and we’ll ship it to China! Just make sure the address to China is there. We’re on Twitter where I post about China news and what my bilingual son says that makes us both laugh! We’ve got a Facebook Fan page and we also do China Stories. If readers have funny stories about their time in China or talking to Chinese in their home country or anything to do with China they can go here and send the story to us and we’ll try to make it into a comic. We’ve done a few already, my favorite one is about the sterilized potato!

You can order “Electric Voices and Stinky Tofu” here.