Kellen Parker, who has both been featured on and contributed to Lost Laowai over the years, is spearheading a new project called Phonemica, which aims to “record spoken stories in every one of the thousands of varieties of Chinese in order to preserve both stories and language for future generations.” 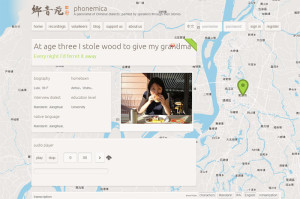 We’re a small group of linguists (and a growing group of volunteers) that believe that there is tremendous value in documenting China’s rapidly disappearing languages and dialects. Phonemica is a project to do exactly that. We are building an open archive of stories from people all over China and the Chinese diaspora, told in the everyday speech of their home towns.

These stories are not just limited to Mandarin. We’re recording Cantonese, Hakka, Wu and every other language with a Chinese connection. Our ultimate goal is to have truly enjoyable stories representing the full diversity of the Chinese languages. Think of it as a Chinese-language version of StoryCorps, but backed with a powerful system for linguistic analysis and preservation, all of which anyone can contribute to and anyone can use under our Creative Commons licensing.

To date we have about 50 recordings. Our goal is to have over 500 recordings up by this time next year. This is an astonishingly large undertaking, and we are working with crowd-sourced, volunteer-generated content.

This is a fantastic undertaking, and if you’ve any interest in language preservation or Chinese language/dialects, please donate if you can to help assure this happens. As of this writing, the Indiegogo campaign is only about $800 away from being funded, with just a little over two weeks left.