If you’ve happened by Lost Laowai recently, you’ll have noticed that the site was down. The reason should be pretty apparent why — she’s been redesigned!

For months I’ve been trying to find the time to sit down and give the site a bit of development love, and for months I failed to do so. The challenge was that I did not just want to slap together a cosmetic change, but rather I wanted to really look at what Lost Laowai was, what it’s become and where I’d like it to go in the future. Warning, there’s a bit of meandering ahead… tl;dr — site’s been updated, enjoy.

If you’ve happened by Lost Laowai recently, you’ll have noticed that the site was down. The reason should be pretty apparent why — she’s been redesigned!

For months I’ve been trying to find the time to sit down and give the site a bit of development love, and for months I failed to do so. The challenge was that I did not just want to slap together a cosmetic change, but rather I wanted to really look at what Lost Laowai was, what it’s become and where I’d like it to go in the future. Warning, there’s a bit of meandering ahead… tl;dr — site’s been updated, enjoy. 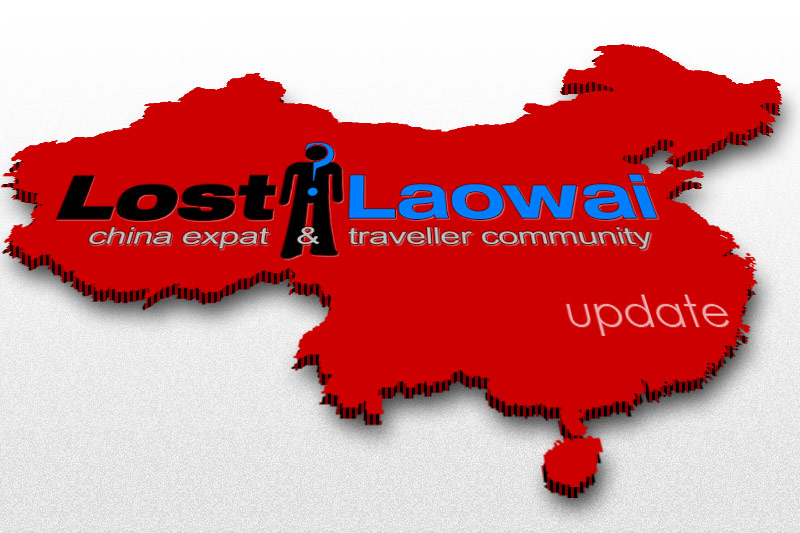 I’ve been operating this site for about seven years now, and in that time it has gone through nearly as many changes and variations as the online China expat community has. I’ve added features, removed features, seen numerous wonderful contributors come and go, and played host to more than 700 posts and 7500 comments. The site has made me laugh, cry, sweat and scream.

All of that played a factor in this redesign. The biggest change has been simplification. The fact is that when I started this site I was a single ESL teacher working 16 hours a week in a private language school. These days I have a full-time job, am married and have two kids (for those keeping track — number 2 arrived just over a month ago — time, not on my side). That change has been reflected in the amount I have been posting on here, and not to the benefit of the site.

Fortunately, we have some great writers who have helped me continue to fill the blog with what I feel is relevant and useful conversation about living in China. However, I realized that if I didn’t get the site into a more streamlined-shape, the weight of it was going to cause me to abandon it completely — something, in all honesty, I came very close to doing.

But the thought of letting her die broke my heart, and so I decided I would double-down and refocus on what has always been my goal for Lost Laowai — creating a source of information and commentary for all of us foreigners who have for whatever reason washed up in this exciting, crazy, wonderful, mind-numbingly frustrating country.

First — for most of the site’s history, it was divided into two “parts” — one was the “blog”, containing somewhat frequently updated posts by a variety of authors and powered by WordPress; the other was the “site”, which was handled by Drupal and contained static information about China as well as a revolving door of other features. The reasons for this separation aren’t really important, but they were relevant and reasonable at the time. Goal number one in the redesign was to eliminate this division. After tossing and turning over which way to go, I decided to kill the Drupal end of things, and migrate all the “site” content into WordPress.

This also meant taking a look at some of the sections of the site that, while useful, had become time sucks for moderating. These (the biggest being the “Useful Sites” and “Laowai Answers” sections) required users to register, and required me to delete an endless barrage of spam users and submissions to both sections. I may look at re-introducing these sections down the road in some modified form, but for now, I’ve killed them for the sake of being able to give my attention to the areas of the site that I feel are most useful and interest me the most. Unfortunately, this means that if you had a user profile on Lost Laowai previously, it has been removed. Of course, all comments on the blog still remain, and I suspect that most of you will not even notice the loss of these sections.

I’ve also decided to take on two additions to the site that I’ve long wanted to have, but feared would get lost in the glut of trying to do too much. Now with a more ‘trimmed’ setup, I feel confident I can add and manage them in an effective and cohesive way. They are Events and City Guides — both of which are very much still unfinished, bear with me. Events will be a place where we can showcase events across China that expats might be interested in, and City Guides are exactly that — guides for some of the larger/more interesting cities in China.

On top of that, I’ve decided to open up the content stream a bit and instead of only focusing on expat commentary/advice/rants, we’ll be publishing more expat-relevant news several times a week (or as news presents itself) as well.

Simplification was also my main ambition with the site’s surface redesign — a lighter colour scheme, simplified navigation, and a less-complicated/brighter logo.

The site is now 100% responsive (well, near 100% — there are still a few bits that need my attention). This means you can view the site on virtually any modern device — whether it be desktop computer, tablet or mobile phone — and the site will adjust appropriately to display in a more suitable size/layout. Should you feel so inclined, if you are viewing this on a desktop computer, you can resize your browser and see instantly the changes that happen at different sizes.

I should also mention that the site has been designed with very little consideration for older browsers. I know some of you are stuck on old school-/work-supplied PCs rockin’ ancient versions of Internet Explorer (and we likely have your PC to thank for the buckets of spam we all get). If you can, do everyone a favour and download Chrome or Firefox. If there is insistence on a Chinese browser, recent versions of 360 Secure Browser aren’t terrible. For my part, I’ll do what I can to get some shivs in place to make things at least presentable to you all.

Hopefully you enjoy the changes as much as I do. And, please, if you notice any major errors, broken links, or other funk, do let me know. Also, if you’re interested in contributing to Lost Laowai, please check out this page for details.

Thanks for bearing with me while I get the remaining changes in place, and I look forward to your feedback in the comments below.