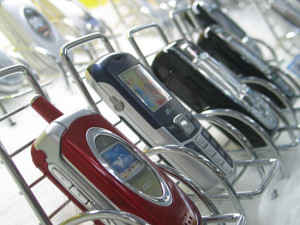 Though images of rice paddies being tended to by sun-weathered farmers and their oxen might still creep to mind with the mention of ‘China’, rest assured technology has very definitely arrived in the Middle Kingdom. With the exception of the most remote villages of China’s vast rural areas, mobile phones and the Internet are everywhere.

China leads the world with more than 600 million cell phone users, and 400 thousand plus people with Internet access of some sort. What’s more, access to both mobile networks and the Internet are cheap and easy. We like cheap and easy.

In the rapidly expanding major cities throughout the country mobile phones are nearly as common as chopsticks, with every family member having their personal set.

Electronic markets are swamped with a sea of vendors hocking the latest Motorolas, Samsungs, Nokias and a plethora of lesser-known Chinese brands of varying degrees of quality. Prices vary, and are generally not too far off Western prices. Many things in China are astronomically cheaper than the price tags of the West; however, non-domestic electronics are usually not such an item.

If you’re the gambling sort and looking to save some cash, you may want to purchase a second-hand phone – most mobile phone markets will have dealers selling these for a much discounted price. They’ll also purchase your old one if you’re upgrading.

Mobile phone service is largely distributed by two major providers — China Mobile and China Unicom — with China Telecom recently entering the market as well. All three offer 3G services, but the networks are relatively new, so ask about coverage.

If you currently own a phone you can’t bear to part with, switching it to service with either of these companies is as simple as buying a new SIM card at any mobile phone market or phone card booth and sticking it in you handset. Should it happen to be locked to a specific service provider back home, most cell phone markets will have a guy handy with a computer and some flash software to unlock it for you, for a nominal fee of course.

NOTE: Be aware that many smart phones (most notably the iPhone) are sold with their WiFi abilities yanked out. This is a regulatory issue mandated from above. If you’re looking at buying such a phone from a local market, you may want to look in to phones imported from Hong Kong or abroad. There may be warranty issues with these phones, but they should be full-featured.

Internet service is provided via a central telecommunication bureau or by visiting any of the too-many-to-count net bars (Internet cafes). If you are looking to get Net access where you reside in China, it’s best to talk to a local, as they’ll be able to point you in the right direction dependent on your needs.

Like the rest of the planet, ADSL/High Speed is the most common form of net access. You will usually need a passport or ID card and pre-pay for a set number of months. Rules can vary from city to city, but it is also not uncommon for the provider to require your landlord’s ID card as well.

Costs vary, but as of this writing, a basic 1Mbps package costs about 110 RMB, and includes 30-40 RMB of home phone credit as well. Similar (though slightly more expensive packages) are available in 2Mbps and 4Mbps download speeds.

Though painful to use, dial-up access is also available, and generally comes in subscriber, prepaid and pay-as-you-go (billed directly to your land-line) forms.

If you can’t be hassled with getting connected at home, there are no shortage of Net bars to kill a few hours in — or, as is often the case with China’s youth, days — in.

Net bars range in price, but often go for 1 or 4 yuan per hour depending on the city, area and smell of the place. You may have to fight for a seat with some rabid WoW player however. Net bars are usually equipped with chat software, web cams and headphone/mic sets.

It should be noted that the Chinese Internet is heavily firewalled, and while accessing Internet sites in China, you may receive errors that the page can’t be accessed or doesn’t exist. What the future of site-blocking is in China is anyone’s guess but in recent years it hasn’t been relaxed as some previously predicted.

Here are a few helpful blog posts and articles:

This is often not as easy as it is made to sound.

Some of the IP cards require being ‘bound’ to one phone number, which is assumed to be a (very unneeded) security/convenience function. Binding, and unbinding the card can be a real pain in the ass when the instructions are in broken English, if in English at all.

Should you be fortunate and get a card that doesn’t require binding (if anyone knows how to distinguish, please let us know), then simply call the IP card number, press the button (often #2) for English, input the ID number and password (and a couple of #’s when required), enter the number you want to call (with country code) and bob’s your uncle.

Note: phone cards come in 100 RMB chunks, but this is not the price charged for the card. Generally speaking 100 RMB worth of IP card time will cost you between 30-40 RMB.

In our time in China, we’ve found that VOIP services, such as Skype, are just a reliable and clear as most IP cards, and are generally cheaper. Be sure to download the International version of Skype though, as the Chinese version has some risks.