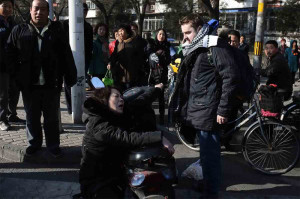 Beijing police have announced the foreigner who originally cried “fraud” after being accused by a woman of hitting her with his motorbike will be fined, detained and deported.

The incident occurred on December 2 and immediately went viral across Chinese social media. Initially netizens appeared to favour the foreigner’s story, as tales of (fake) accident victims blaming people just trying to help abound in China. However, the tide quickly turned as more reporting was performed and additional information about the case came to light, including two videos — one showing the foreigner cursing out the alleged victim and one showing what appeared to be him crashing into her after an illegal turn.

Further investigation by the police revealed he was responsible for the accident, and was driving an unregistered motor vehicle at the time. The investigation also revealed the foreigner and his father were working illegally.

[The perpetrator] was given punishment including seven-day detention and a fine of 1,500 yuan for his aforementioned violations of traffic regulations, said police.

Their employer will be fined 20,000 yuan, according to police.

Check out this Beijing Cream post for a bit more context.