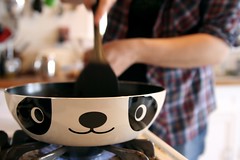 I have a confession to make. For the first four and a half years I lived in China, I did almost no cooking. Sure, I owned all the necessary equipment- I made sure of that. I wanted people to think I cooked, but didn’t really want to actually do it.  Going out to eat seemed so much easier. After all, it was cheap, tasty, and sociable. As a single man, the process of buying ingredients, preparing a meal, and eating it in solitude seemed unrewarding. Plus, then I’d have to wash the dishes. Who wants to spend their evenings doing that?

I suppose had I arrived in China a little later in life, I’d have known how to cook. Over the years the friends with whom I used to scarf burritos and pizzas during our university days gradually learned how to prepare their own meals. They had little choice; in the West, young people with meager salaries simply cannot afford to eat in restaurants all the time.

But in China, eating in restaurants is one of life’s great pleasures.  From the beginning I embraced the wonderful Chinese concept of 热闹: hot and noisy. I’d gather a group of friends, order way too much food, and enjoy a raucous meal for a mere fraction of the amount it would cost back at home. And when you’re done, you’re done. No dishes!

I admit this is a strange way to begin an essay about why I now like to cook. I think, however, that my experience described above might resonate with some of you who, like me, enjoyed a mid-20s period of adolescence as laowai in China.

So in homage to a neat little essay I stumbled upon this morning, I now present why I cook:

What about you? Why do you (or don’t you) cook? Perhaps a lost-laowai recipe thread might be the offing, no?