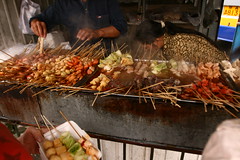 I was just leaving a comment on the always refreshingly drinkable Beijing Boyce blog when I saw one of my biggest Chinese Pinyin pet peeves – chuanr.

串儿, for those who’ve been in China for less than an hour, generally means tasty bits on a stick. Chuàn/串 (meaning to string together) + ér/儿 (a suffix that makes some verbs into nice little nouns) technically comes out as “chuanr/chuan’er/chuan’r”… but when pronounced it is “chuar”.

Never, not ever, have I ever, never, heard anyone, ever, say Chuan-er.

And good thing, because it sounds like something you call someone you don’t like. “Yeah, he talks big, but what a feckin’ chuan’er.” “Ohmygod, did you see what she’s wearing? Total chuan’er…”

Now I understand that I can’t just go re-writing the phonetic rules of Chinese pinyin to fit my fancy – but by spelling it chuan’r we’re not exactly in keeping with them either, are we? Admittedly, my Chinese is about as suspect as many a chuar stand’s meat source, but pinyin for chuar should be “chuàn ér”, making chuàn’r just plain wrong, no?

So if it’s going to be wrong anyway, when Englishizing it, can’t we just write it chuar. No hyphens, no apostrophes, no tone marks… just chuar. Like sushi, taco, kabab or any of the millions of other foreign-language foodstuffs that find themselves spoken by our finesse-less tongues.

Next up… why the hell do we spell it Tsingtao…and what’s with Ha(e)rbin?