A South American man, identified by police only as “Godoi”, has been sentenced to five years in prison for providing other foreigners with illegal Chinese visas. 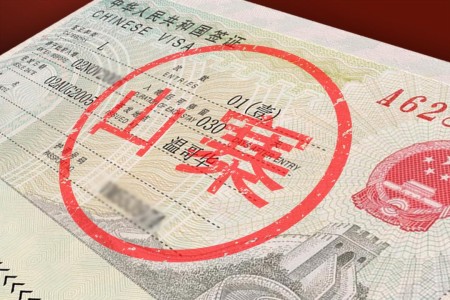 Godoi used copies of his company’s business license and tax registration certificate, along with work contracts from his business partner and a fake seal, to secure Chinese residence permits for foreigners.

With the fake documents, Godoi applied for residence permits for foreigners at the city’s employment service center and the Exit-Entry Administration of Shanghai Public Security Bureau.

Police started suspecting late last year after a foreigner who applied for a residence permit submitted documents for a job position that was “significantly different” from his previous work experiences. Investigators also found that Godoi had helped foreigners set up companies in Shanghai through which they applied for work visas for others.

Police did not reveal how many foreigners applied through Godoi or their current status, but said Godoi profited more than 50,000 yuan (US$8,050) from the illegal services.

Two Chinese employees at Godoi’s company, a man surnamed Sun and another surnamed Zhang, were also punished. Sun was sentenced to a year and a half in prison with probation, while Zhang got a year in jail with probation. [source]

While police did not reveal the man’s identity or his company name, according to a comment left at the Shanghaiist, “Godoi” is Pedro Godoi, a Brazilian who moved to Shanghai in 2008 and ran Godoi Consulting as well as the now defunct English-language Settling Magazine.

According to officials, this is the first case of visa fraud involving a foreigner. However, it is not the first time a sentence has been delivered for selling fake visas to foreigners in China. In what the Ministry of Public Security has called the “largest case of the kind in many years;” a Nanjing man, Sun Haigang, was fined 60,000 RMB and sentenced to eight years in prison last September for selling illegal residence permits to foreigners. Sun’s six accomplices, from across China, were also sentenced.