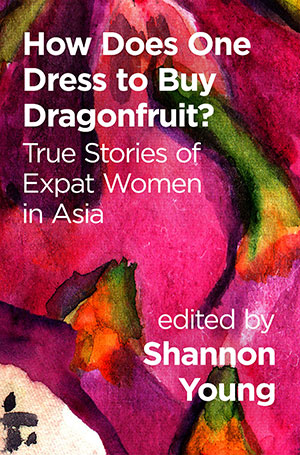 This new collection from Signal 8 Press brings together 26 stories from the lives of expat women living in Asia. Being an expat woman living in Asia myself, I jumped at the chance to read and review it.

Sometimes, after getting a book review assignment, I dread writing the review (and attempt to pass it off to another reviewer) because I find it very difficult to come out in public and say I hated a book. I’m very happy to say that’s very much not the case here. This anthology provides a peek into the fascinating lives of women who have stepped out of their native lands and into the very different and often challenging life of an expat in Asia. In the editor’s foreword Shannon Young voices some of the many questions these women struggle with:

How can I be respectful of the rules of this new culture? When do I choose not to adhere to the norms of my adopted home? Should I assimilate? Should I be independent? Or accommodating? Where is the point of equilibrium for a modern woman navigating a new culture?

The stories in this book are set all over Asia; in Cambodia, China, Thailand, Hong Kong, Japan, Taiwan, Vietnam, Malaysia, Mongolia, Korea, the Philippines, and Burma. Those place names are just as they are listed in the book, by the way. If you’ve got an issue with what one of those places is called, please don’t take it up with me.

As a confirmed Laowai, I was especially interested in the stories from China.“The Weight of Beauty” by Dorcas Cheng-Tozun takes a close look at body image and racially based expectations for an Asian American in China. For Dorcas, living in China without speaking Mandarin is “equal to a blonde, blue eyed woman in a cowboy hat and boots in rural Texas barely comprehending a word of English.”

Katlin Solimine writes “Finding Yuanfen on a Chinese bus”, in which she decides to do something I would do nearly anything to avoid – ride an overnight bus through China during Spring Festival. The journey is one of physical distance, as well as emotional distance – who is she when she walks out of a relationship and into this place where no one knows her name?

Eva Cohen gives us her perspective on what it’s like to be “Jewish in China,” and how she finds unexpected camaraderie and respect from many Chinese, who welcome her, as China had welcomed so many of her people throughout history. The unique connection she feels between the Jewish and Chinese peoples invites her to build more bridges of mutual respect and understanding.

Christine Tan tells us the story of “An awkward phone call,” when a Chinese man she barely met years ago calls her for a date while her Western husband is out of town. He seems sad and lonely and is looking for something that Christine, who is struggling through an altogether different kind of heartbreak, can’t help him to find.

Would you take your Chinese father-in-law along on your honeymoon? That’s just what Jocelyn Eikenburg did in her “Huangshan Honeymoon.” Does being a filial daughter-in-law mean sleeping a 3-person hotel room with not only your husband and his father, but also with your father-in-law’s stinky sweat-discolored socks?

Edna Zhou is used to being the “Token” Asian in her suburban Pennsylvania neighborhood; not to blending in, becoming an invisible speck in a sea of people who look just like her, but aren’t. “I’m too Chinese for Americans, too American for the Chinese,” she writes, struggling to define her identity and find her place as an expat with a mixed heritage, and finding those few who can see her simply as who she is – Edna.

Ember Swift writes about a different kind of identity crisis in “Chinese Stonewalls,” when she falls for someone completely unexpected – a beautiful, stylish, musical – man! “You know that I am usually only with women,” she whispers to him, shaking with nervous energy, as they gaze over the breathtaking scenery of the sun setting on Dali. Can he accept her, who she really is? Can she accept her own attraction for someone of a different gender? Can China accept her not only as a foreign woman, but also accept its own homosexual population?

The book is full of turning points, realizations, and rebirths for the women who write here. Tales of experiencing labor on the back of a motorbike swerving through traffic on the streets of Ho Chi Minh City; of walking through the dark deserted streets of late night Bangkok, fearing no evil; of flirting through a translator with a Mongolian man who can’t speak English, and more. In the last story of the book, “Charting Koenji,” Kathryn Hummel sums up her experience and that of so many of us living expat lives in Asia, seizing the moments as they come, thrilling us, fulfilling us in ways we could never have guessed before we embraced this expat life: “The moment of relinquishing the self you knew in the old place, of tracing another identity in the new, of coming to a dead end, of losing yourself again.”

Why not lose yourself for a while? Wherever you are coming from, wherever you’ve made your home, you’ll likely find common ground with at least some of the courageous and intriguing women who have shared their stories in How Does One Dress To Buy Dragonfruit?

For more information about the book, check out the publisher’s page, as well as the book’s Facebook page. You can also purchase it on Amazon