It’s hard to ignore that there seems to be a budding baijiu buzz forming. Helping with this is a new international event being organized by Beijing’s man-about-town, Jim (Beijing) Boyce. Join me as pick his brain on the spirit of the event and the event for the spirit. 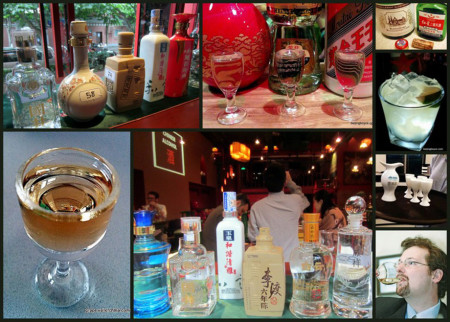 I’d like to say I have a complicated relationship with baijiu, but the truth is that I swore off the stuff in about month-six of my China experience, and haven’t looked back in the decade since. I have to admit though, the growing interest in China’s most drunk drink has me raising an eyebrow and wondering if perhaps the millions upon millions of Chinese consumers aren’t on to something.

Jim Boyce has written about wine, spirits and beer during the past decade for his nightlife blog Beijing Boyce, wine blog Grape Wall of China, and both trade and mainstream media publications. Let’s get into it with him.

First, what is World Baijiu Day? Why does the world need a day dedicated to baijiu?

World Baijiu Day aims to get people together at bars and restaurants, or even at home with friends, to try baijiu on August 8. Why is it needed? Baijiu is the world’s most consumed spirit but few beyond China have heard about it let alone tried it. Anyone interested in spirits should try baijiu at least once in his or her life.

Any specific reason that August 8th was chosen for the inaugural date of the event?

It’s months away and provides lots of time to prepare. It’s on a Saturday which tends to be a party night. And it appeals to the superstitious, given eight is a lucky number and the event is on the eighth day of the eighth month.

People have suggested August 9, since the numbers for the month and day — “ba” and “jiu” — sound like bajiu, but I’m not sure this event would work on a Sunday. We’ll see about a World Baijiu Weekend. Anyway, I propose everyone toast New Year’s Eve-style at midnight on World Baijiu Day, as the calendar shifts to August 9.

“Fire Water”, “Paint Thinner”, “Nail Polish Remover” … I’ve heard expats in China refer to baijiu by a number of endearing names over the years. Why do you think the drink is so widely despised by foreigners and yet so revered by Chinese?

Most people dislike drinking spirits straight at room temperature, be it gin, rum, whisky or baijiu. When you add that baijiu tends to be pungent, high-proof and knocked back ganbei-style — shot after shot after shot — it’s easy to form negative associations. If people regularly downed a dozen-plus shots of Beefeater or Laphroaig, my guess is most of them would despise those, too.

But ganbei-style drinking is how alcohol is regularly consumed in China and social customs usually trump alcohol appreciation. I focus more on wine and often see foreigners shake their heads in disbelief during dinners when people drain glasses of a very nice vintage. To them, the wine should be savored and discussed. But to the people downing it, the person they are toasting is more important than the nuances of what’s in that glass. The same generally goes for baijiu, although I find it easier to appreciate a small shot of spirit than a six-ounce glass of wine done in one go.

Anyway, the aim of World Baijiu Day is not to convert everyone to ganbei-style drinking. As noted, most people do not enjoy straight spirits, so that only appeals to a narrow niche. That’s why we will go “beyond ganbei” to include baijiu-inspired cocktails, infusions, foods and even beer. We need to look at more ways of presenting baijiu in order to make it accessible to more people.

and blog by Derek Sandhaus, as well as Capital Spirits opening in Beijing, and soon World Baijiu Day, it seems that there’s a bit of a change happening. Are foreigners warming to the drink do you think?

The craft beer, spirits and cocktail movements happening in many parts of the world has both trade people and consumers trying new and–for lack of a better word–exotic products. For anyone outside China, baijiu certainly fits the bill. Also, as more people visit, study and work here, and as the international status of China grows, people are increasingly curious about this country and what it has to offer, including its foods and beverages.

That’s not to say there has been zero interest. I’ve written about Beijing’s drinking scene for almost a decade and bars have long experimented with baijiu cocktails. If you read the interviews on the World Baijiu Day blog, almost every person so far had their first visit to China and their fist baijiu experience in the 1980s. Beyond that, I have no doubt some expatriate in Beijing tried substituting baijiu in his or her gin tonic a century ago.

But yes, there does seem to be growing interest among foreigners here and drinkers overseas, and we may look back in ten or twenty years and say this as the time when this spirit showed up on the world’s booze radar.

I’m sure I’m not alone when I confess that I was scarred by the liquid early in my China life and have actively avoided it since. For someone like myself who is now curious and wants to give baijiu another shot, so to speak, what would you suggest? Is there a ubiquitous and relatively inexpensive bottle I can begin the healing process with? A method or pairing you’d recommend?

I would suggest grabbing one bottle each of a light-, strong- and sauce-aroma baiju. You don’t need to drink a lot, just do a small pour of each. And whether you ultimately like baijiu, you should at least be able to appreciate the differences of these three styles.

I would also suggest trying an infusion. I took a bottle of 11-kuai 42-percent-alcohol Niulanshan baijiu and infused it with pomelo rind and ginger. I taste-tested it on a dozen people and they were surprised at how good it tasted neat and on ice. I also tried an infusion with coffee beans and vanilla that didn’t work as well but was still drinkable.

I think the main issue for many people is actually buying the stuff. If you don’t read Chinese characters, the supermarket’s baijiu aisle will be as daunting as the shelves of Italian and French wines are to many Chinese consumers.

or using online resources. I like this baijiu page on yesmywine.com. You can click on the links to the light, strong and sauce aromas and get an idea of the brands and prices, then order direct or match the photos with labels at your local retailer. If you are in Beijing, you can also drop by Capital Spirits and try the intro baijiu flight, which includes four styles for rmb40.

Excellent tips. Getting back to World Baijiu Day, I’m sure Beijing will be loaded with events. I realize it’s still early days, but can expats in other cities around the country expect any of their local haunts to sign on with events and/or specials?

Venues in New York, Los Angeles, London and Paris have either confirmed or will soon confirm participation in World Baijiu Day, and I am working on spots in Christchurch, Melbourne, Buenos Aires, Houston and elsewhere. In China, there will obviously be venues in Beijing, Shanghai and Chengdu, among others, joining the fun. This project was only launched a few weeks ago and there is lots in the works at the moment! But I’m happy so far with the response and optimistic we will have venues in at least a dozen cities participate.

And finally, how can people find out more about World Baijiu Day (site, social media, etc.)?

People can check the World Baijiu Day website and Facebook page, and both this dedicated Twitter feed and my personal account. I’ll soon have Instagram and other social media sites up as well as a fancy interactive world map that lists all venues. People can also connect with me on wechat / weixin at “beijingboyce” where I’ll be steadily cranking out shots of info on World Baijiu Day.