With flak jacket on, and earplugs in place, I thought I’d usher in the new lunar year with a little post about the origins of the Chinese New Year, as well as some useful language for the holiday.

This is my fourth endurance of the explosive holiday, and I always approach it with mixed emotions. On the one hand, it’s about as abrasive as a holiday can get. It’s full of filial duties that force a massive population that most days can’t afford meat to spend a year’s worth of savings on appeasing culture and custom. It’s also loud and dangerous, as fireworks and firecrackers go off pretty much nonstop for several days with little to no regard for public or personal safety.

However, it’s still a holiday. People are happy and excited. There’s a warmness between strangers that you don’t get the rest of the year. There are a lot of things in Chinese culture that divide its people into races and classes, but Spring Festival brings them all together.

Origin: The holiday allegedly dates back 4,000 years to when the Chinese first adopted a worship in the sun and the moon. Largely – as he is with all things – Qin ShiHuang, the first emperor of China, is credited as kicking off the celebrations. It wasn’t until the Han Dynasty (206 BC ~ 220 AD) that the festival began being celebrated in the first month of the year.

Mythology: The common myth that surrounds the Chinese New Year is that long ago the Chinese word for year – 年 nián – was the name of a monster who woke up every winter to devour people. As most are, the beast was afraid of loud noises and the colour red – hence the firecrackers and red clothes/paper cuttings/envelopes/long underwear that are so common this time of year.

Dates: As the festival is in recognition of the new year according to the Lunar Calendar, its date on the Gregorian calendar changes yearly. Generally it falls sometime in the months of January or February.

Why two names: In most of the world the festival is called “Chinese New Year”, but it hasn’t been called such in China since the 1911 revolution and adoption of the Gregorian calendar in China. The bringing in of the Gregorian calendar brought with it January first as the “new year” (新年 xīnnián), and as such the traditional Chinese holiday was renamed “Spring Festival” (春节 Chūnjié).

A break down of the festival

Spring Festival customs are as diverse as the landscape of China, but here are some of the more common, as well as a break-down of which days are important. I originally wrote this with the help of my (now) wife a couple years back at my blog:

Small New Year/Xiao Nian 小年 (varies, but in the north it’s one week before): Basically you eat dumplings and give the world a sampling of the firework extravaganza that is to come. This is also the day you clean the whole house so your relatives don’t think you’re a pig when they come and visit next week. And so begins the final week of shopping craziness for buying gifts (strange, but practical, things like a box of milk, bottles of pop, fruit, etc. are all acceptable gifts) and readiness for a few days of nothing being open.

The afternoon is reserved for napping, followed by family members burning (fake) money to send to their ancestors. The money, along with incense, is burned in a drawn circle (if burned on the road) or in front of the grave (墓碑). Extra money is included to appease the ghosts that live on the path to heaven. They are paid off in an effort to stop them from stealing the cash during its journey to the rightful recipient. Fireworks are also used to scare away spirits looking to steal the money. 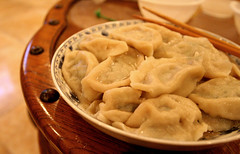 In the evening the entire family gets together to make dumplings (饺子) and cook the dishes prepared that morning. At the moment when the dumplings are finished being boiled and are set in a dish, fireworks are lit to celebrate. When all the food is ready, the family gathers around the TV to watch Spring Festival programmes (dancing, singing, magic, acrobatics, comedy, and small plays) while feasting.

After dinner, some play Majiang or cards, or just continue watching TV and chatting until midnight draws near. At midnight everyone eats dumplings again and launches fireworks of an amount that few other countries in the world could imagine. After midnight all of the younger generations must tell their elders “Guò Nián Hǎo” and the older folks give the youngsters red envelopes (红包) filled with money. At this point the older people can go to bed, but those of fewer years usually stay up all night playing Majiang, chatting or watching TV.

New Year’s Day/大年初一: Breakfast bears a striking resemblance to last night’s dinner and midnight snack – more dumplings and more fireworks to celebrate. New Year’s Day is usually spent with the father’s side of the family; eating, chatting and playing more Majiang. “Guò Nián Hǎo” is the phrase of the day, and should be said to everyone you come across.

The Day After New Year’s Day/初二: Usually spent at the mother’s family’s house in much the same fashion as the previous day.

Lantern Festival/元宵节 (Day 15): About two weeks into the new lunar year the Chinese celebrate what in English we’ve called Lantern Festival, but in Chinese takes its name from the sweet balls (元宵) made with glutinous rice flour that everyone must eat on this day. At sundown money is again burned and candles (or electric lights) are put in front of the deceased’s grave to help light their path to heaven. After a dinner of boiled or fried yuánxiāo some will stay at home and watch another gala performance on TV and some will go out to the street to see the lantern displays that have been placed everywhere. Again, fireworks fill the sky.

I’ve recently fallen into a premium membership with the rather excellent ChinesePod.com

. As such, it was the first place I turned to brush up on my rather dusty Chūnjié shēngcí.

And some random vocab I think might be useful (NOTE: Hover over the Chinese for the pīnyīn.):

See you all in the Year of the Rat! From all of us here at Lost Laowai…