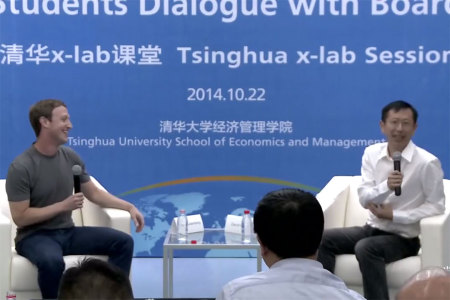 This past Wednesday Facebook founder Mark Zuckerberg delivered his “first ever public Q&A in Chinese” at Beijing’s Tsinghua University. Handled with humour and aplomb, Zuckerberg discussed, “connecting the world, Internet.org, innovation and the early days of Facebook.”

According to his Facebook update, earlier in the week he joined the Tsinghua University School of Economics and Management Advisory Board. Commenting on the school, he said, “Tsinghua is an amazing center of learning and research, and it has been inspiring to be with so many talented future Chinese leaders.”

Zuckerberg’s wife, Priscilla Chan, comes from Chinese-Vietnamese ancestry. Chan is quite guarded about her personal life, but has disclosed that her Chinese-speaking grandmother played a large role in raising her. She relayed, however, that she speaks Cantonese, not Mandarin, so it appears Zuck’s been studying on his own for this.