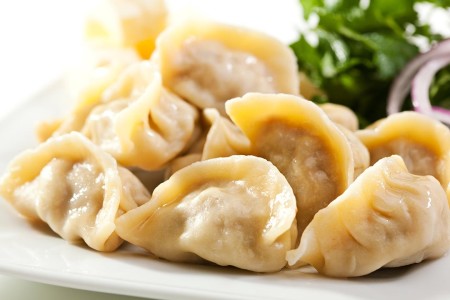 Chinese Dumplings, or 饺子, are nearly as ubiquitous as rice in Chinese cuisine. One of the major foods eaten during the Chinese Spring Festival, they look like the golden ingots (Yuánbǎo) used during the Ming Dynasty for money. Coupled with the fact that the name sounds like the word for the earliest paper money, serving them is believed to bring prosperity.

As a dish prepared at home, each family has its own preferred method of making them, using favorite fillings, with types and methods of preparation varying widely from region to region. This recipe is for the basic wrapper and filling, as well as our favourite dipping sauce — but definitely be bold and experiment with flavours. There’s no end to the types of dumplings that can be made.