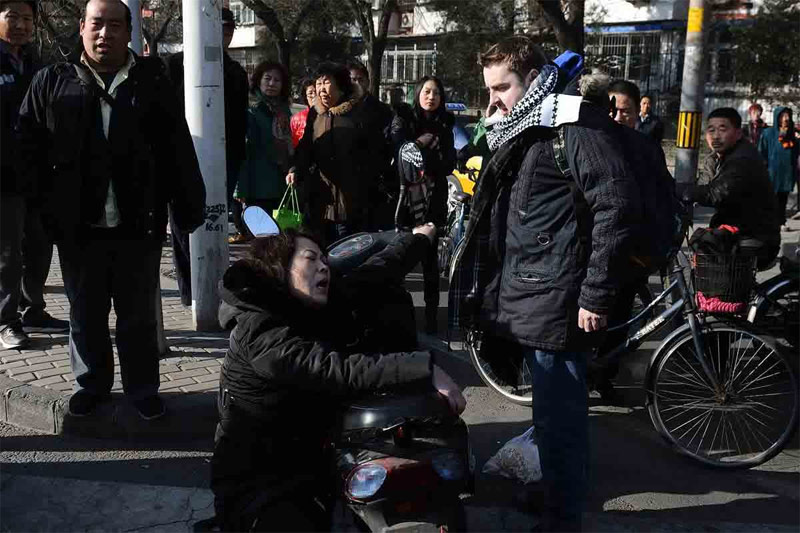 When the story initially broke December 2 on Weibo, the version of events indicated a middle-aged Chinese woman had accused a foreigner, presumably from the UK, of hitting and severely injuring her with his bike. He, and eye-witnesses at the time, denied this — stating that she simply fell to the ground after he passed.

The altercation happened in Beijing’s Chaoyang District. The ensuing argument between the woman and the young foreign man continued for some time, resulting in the man’s jacket being torn and the woman clearly illustrating her injuries were not serious as she tried to maintain her grip on his scooter and get the crowd on her side.

Bystanders and rubberneckers swelled things in the area to a stand-still. From chinaSMACK:

Afterward, this woman obstinately clung to the man’s scooter refusing to let go. The accident caused a traffic jam at the scene for over an hour, with the woman limping and twitching multiple times, insisting that she was knocked over by the foreign young man and that he should be held responsible, forcing the foreign young man into tears.

Not long after the incident occurred, the police arrived on the scene and both parties proceeded to Meitan General Hospital. After being examined by doctors and X-rayed, it was diagnosed that the woman was not injured at all. The woman then once again collapsed to the ground screaming that she was in pain/discomfort. Finally, after negotiations between the two, the foreign young man had no choice but to compensate 1800 yuan in “medical expenses” before the woman would drop the matter and leave.

While originally popular opinion seemed to side with the foreigner obviously being scammed by a woman, multiple reports (and here, and here) since have adjusted their stance and now state the woman was telling the truth and the foreigner actually did hit the woman with his scooter unregistered, red-light-running motorbike.

While it certainly doesn’t prove things one way or the other, a lot of the revised reports have centered on a video that shows the foreigner cursing the woman out something fierce:

Video on Sina as well.

The event even elicited a full CCTV 13 report.

Whether at fault or not, the incident once again illustrates how vitally important it is to try and keep your cool in these types of situations. While the more recent updates are shakily resting on after the fact “independent eye-witness accounts”, it appears that the biggest sway in public opinion came from the surfacing of the video that has a foreigner calling a Chinese woman a “dumb cunt” and “fuck your [various family members]”. Justified (under the presumption that he was being extorted and also that he was violently attacked) or not, once you start shouting strong curses in Chinese to a Chinese in front of a crowd of Chinese, you’ve lost.

UPDATE [December 6, 2013]: Sinopathic has a new post featuring pretty concrete video evidence (embedded below) that the foreigner was completely responsible for the accident and did indeed hit the woman with his bike.